Dizzying._It_is hard to fathom just how many places we have seen since leaving Alaska.  These aren’t necessarily hotbeds of international culture or tourism; simply the view beyond the next bend in the road, or perhaps the mundane spaces between where we are and where we are going that are suddenly lit up by the sun or by a joke or a kind word.  There’s an index of thousands in all of our brains now.  Riding through a Latin American street at night can remind us of everything from Los Angeles to the first time we rode through the darkness in British Columbia.  Sometimes I wonder if we’re harder to impress now that we’ve been at this for so long. 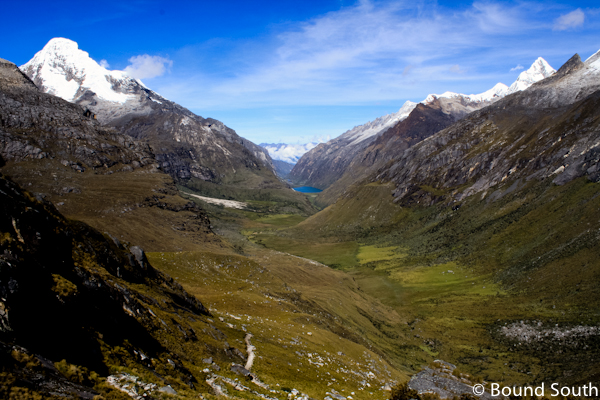 A view from the Santa Cruz trek. 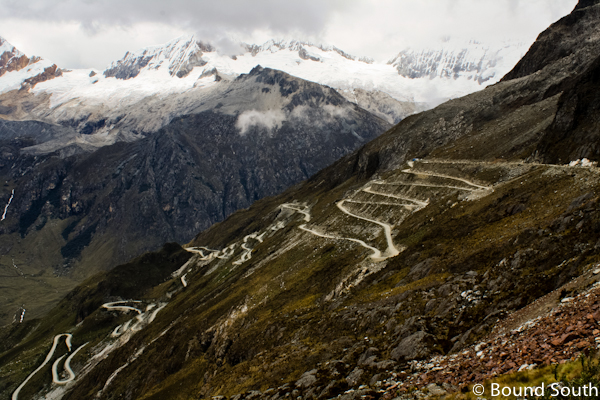 Huaraz was up to the challenge.  Nestled in the most spectacular Andean valley in Peru, between the Cordillera Blanca and Cordillera Negra, Huaraz is a jewel among Peru’s cities.  The city itself is hardly beautiful; a devastating Ancash earthquake of 1970 has left the city scarred to this day without most of its beautiful colonial architecture and urban vibrancy.  It’s still a gem of a city, however, because of what lies outside of it; breathtaking glaciers and snowcapped peaks lie in wait for anyone with the time to trek through them.  The next time we are in Huaraz, we will not leave before trekking at least a week through Huascarán National Park.  The rigorous schedule of a bicycle expedition such as ours unfortunately permitted only a few sojourns in the mountains around Huaraz.

Mountain biking below the Cordillera Blanca. 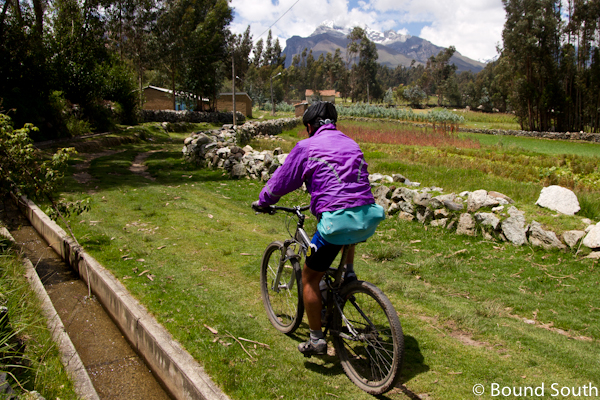 After overcoming a daylong bout of food poisoning, we went on a mountain biking loop near the entrance to Huascarán.  We were guided by Julio Olaza of Mountain Bike Adventure.  Julio was a godsend for us.  Not only did he lend us his shop tools to do some needed repairs on our Trolls, he also shared his story with us.  “Mountain biking saved my life,” he said.  He was battling alcoholism as a young man, decades ago, and he took a chance as tourism was just beginning to pick up in Huaraz and “mountain biking” was just recently born in the late 1980s.  Years later, he is clean and a successful businessman, not to mention an animal on his mountain bike.  Muscling our bicycles over the stones of pre-Incan trails above Huaraz, we could barely keep up.  For the most part we embarrassed ourselves and found ourselves pining after a front suspension fork.  David flipped over his handlebars once.  We had a blast. 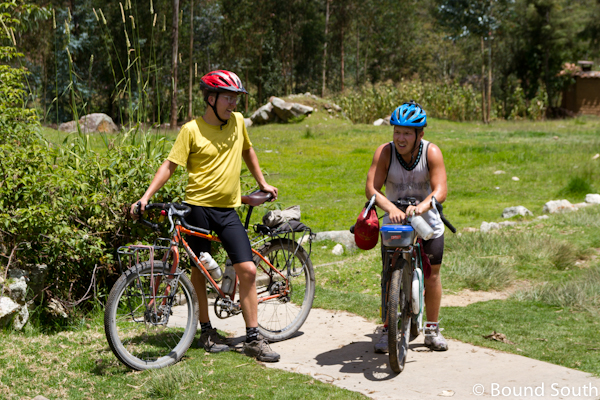 Altitude and the past day's food poisoning made for some tough moments on the ride.

Julio would flick his handlebars and a new trail would appear out of nowhere.

Moments after taking this photo, David nose-dived over his handlebars.

The finale to our mountain biking adventure was our arrival at a high altitude field above Huaraz where a crowd gathers every Friday to play ultimate frisbee.  We joined Peruvian kids, European trekkers, American volunteers, and a host of colorful characters for some exciting play.  There are many disadvantages to a bicycle expedition, among them tan lines and diminished cleanliness.  But a nice advantage is that our cardiovascular systems are borderline Olympic.  We could run all day up at the high 12,000 feet+ of Huaraz, which made frisbee somewhat unfair to a few of our competitors.  In the end, we all had a blast and enjoyed the fellowship of a good meal at the California Cafe when we were done.  There are a few rare, restorative places on this bicycle expedition where we can forget the pressures of our pace southward and enjoy the richness of a place.  Huaraz, you will be missed. 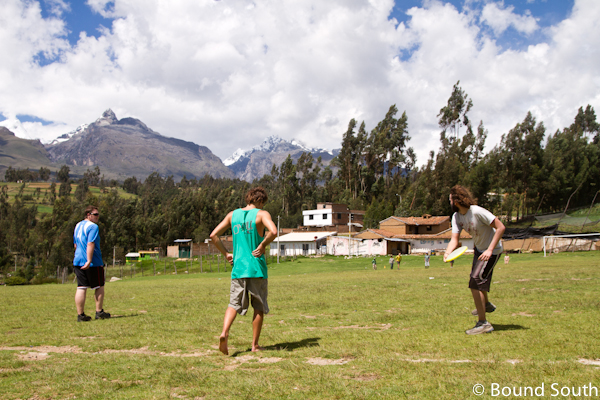 Ultimate frisbee in the mountains

Isaiah runs for the game-winning catch.

Football was played, too.

This was our frisbee crew.

A long time ago in a galaxy far far away, a North Dakotan visited this café and left a book behind.

Every_so_often, Bound South embraces its wild side.  We leave the ease and surety of pavement for the uncertainty and doubt that coincides with the road less traveled.  When we do, we get lost, fall off of our bikes, and endure steep climbs and rotten roads.  Adventure is always available in the Andes.  Leaving Trujillo and the north coast of Peru, we surrounded ourselves with it, wall to wall. 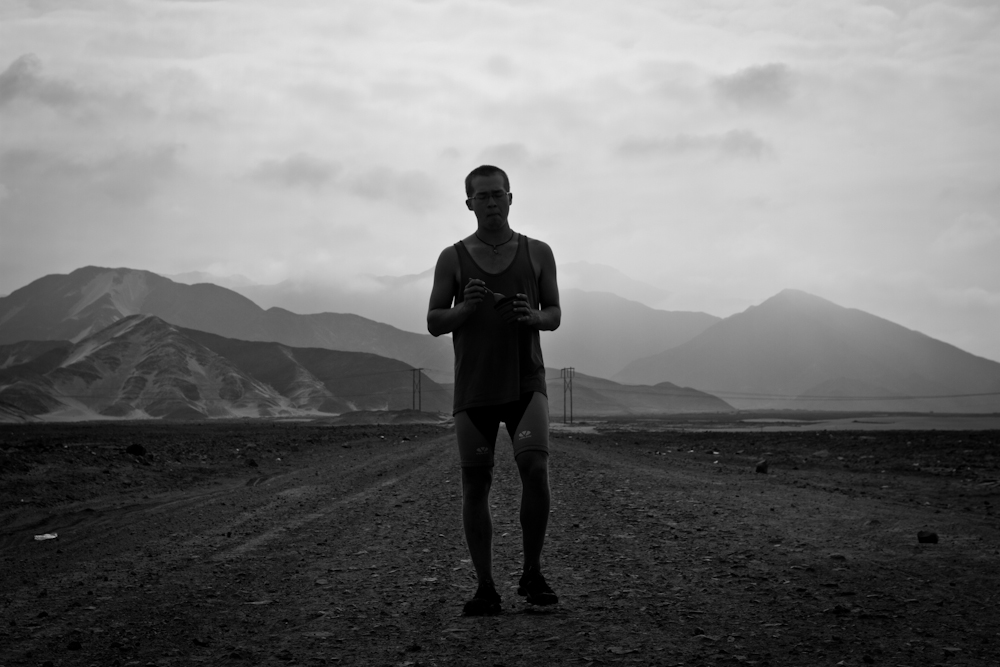 Oatmeal on the plain

Winding our way to the Santa River

Cañón del Pato, translated “Duck Canyon”, is the product of two Andean ridges in Peru, the Cordillera Negra (Black Range) without snow to the west and the Cordillera Blanca (White Range) with snow to the east.  The valley between contains the Santa River, which winds its way to the coast through the canyon.  These two ridges parallel each other from Huaraz to Caraz, where they converge to form the canyon.  Near the canyon’s narrowest gap, a mere six meters across with walls rising up to Cordilleras’ crests, the raging waters of the Santa River power the turbines of a Duke Energy hydro electricity plant.  The Cordillera Blanca consists of hundreds of glaciers, lagoons, and hot springs.  Eight of its peaks rest over 6000 meters, with its highest, Huascarán Sur, sitting at 6768 meters.  Its nature is colossal which gives reason for the canyon’s grandeur.

Part of the hydro electricity plant 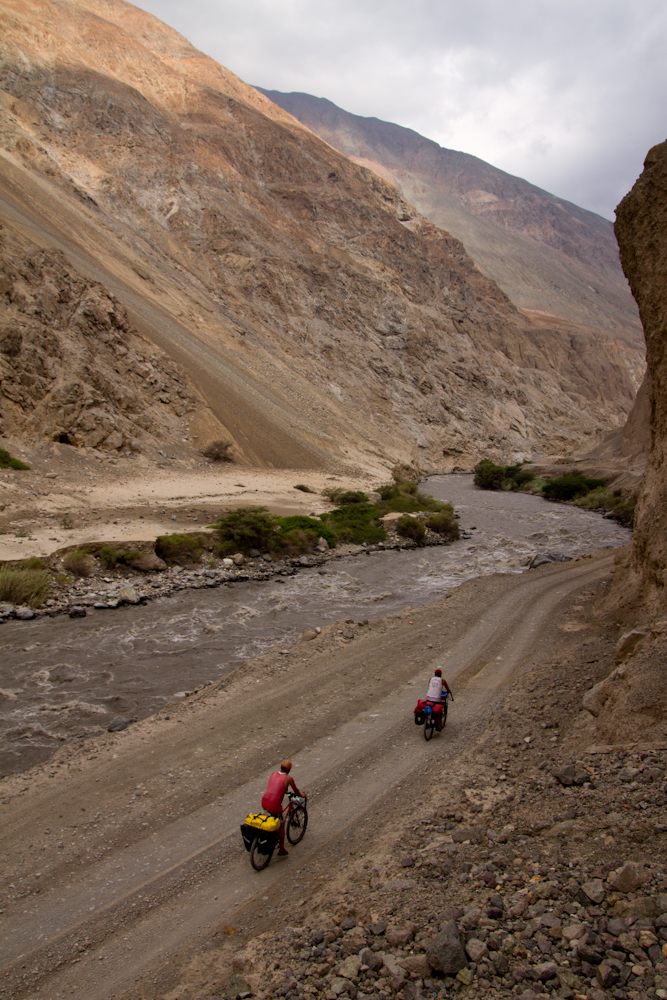 The beginnings of the canyon 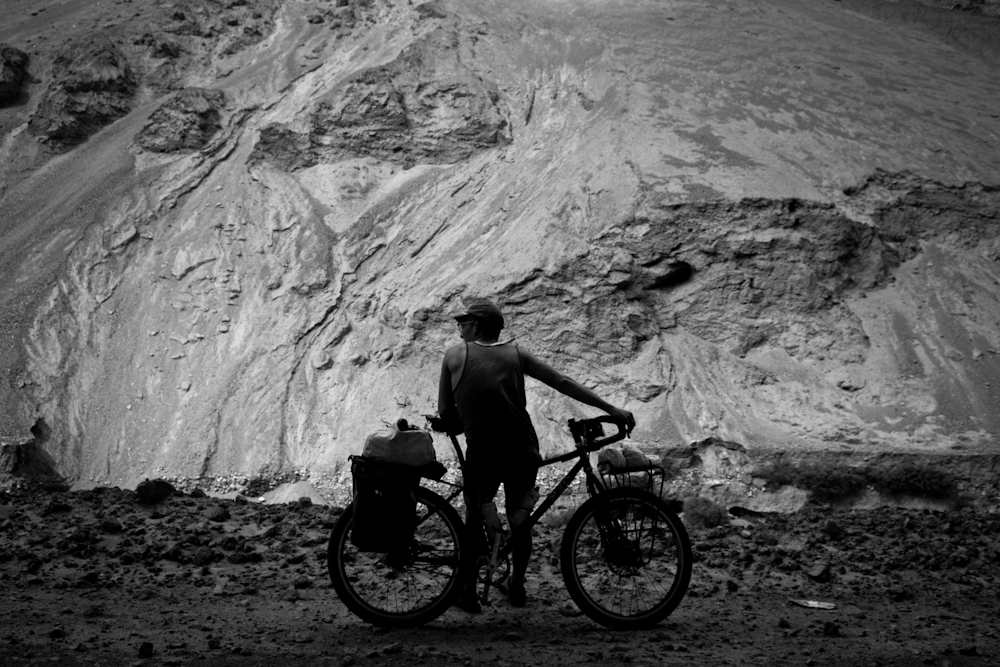 Incredible rock formations were common on each canyon wall.

Even more impressive is the road that winds its way through the canyon.  Carved into the cliff walls, at times hundreds of meters above the river through tunnels and under overhangs, the road climbs gradually from barren desert at sea level to green mountain valleys above 3000 meters.  Beautiful, yes.  Easy, no.  To this day, the inverse rule has held true.  Established in Alaska, the rule reads: “The difficulty of the ride will be inverse to the beauty of the scenery.”

Mud and water substituted rock in some sections.

And challenging it was.  Mango-sized stones and mud holes covered the single-lane canyon road.  Dust coated our sweaty skin as drivers passed by.  Shade was in short supply.  Simply pedaling wasn’t easy; maintaining contact with each pedal over the bed of rocks was an unexpected challenge. It wasn’t the grade of the road that slowed our pace to 80 kilometers a day; it was exhaustion from riding through a bone-jarring sea of loose rock day after day in the heat.  The conditions were tough.  A different approach to riding was absolutely necessary.

Switchbacks led us away from the canyon momentarily

Goliath, equipped with fat and knobby Kenda tires, was put to the test on this road.

Three in a row

Each watt of energy we apply to our pedals is work.  Slick tires and smooth surfaces allow us to easily build speed and maintain momentum.  On rough roads like the one described above, however, each rock or imperfection resembles a hill we must climb, which significantly slows our progress.  Pedaling from Alaska to Argentina isn’t easy.  I sometimes wish that there was only one  mountain pass between Alaska and Argentina (unfortunately, the road south of the equator does not gradually descend to Tierra del Fuego) or that it could be done with a single pedal-stroke.  These are impossible, though; I know that.

Tunnels were a great place to sing.

At the heart of Duck Canyon

We were all exhausted after this day

Spilled fuel meant no cooking for a few days.

And I know the realities of the road.  Challenges and pitfalls are everywhere.  Jagged rocks will puncture your tires and give you a sore butt.  Caps will come loose leaving you with no cooking fuel.  Tunnel darkness will surround you.  The road isn’t perfect.  Yet I have learned to embrace all that shapes this experience – both the discomforts and joys – and ride with purpose knowing that what we ride for is good and just. 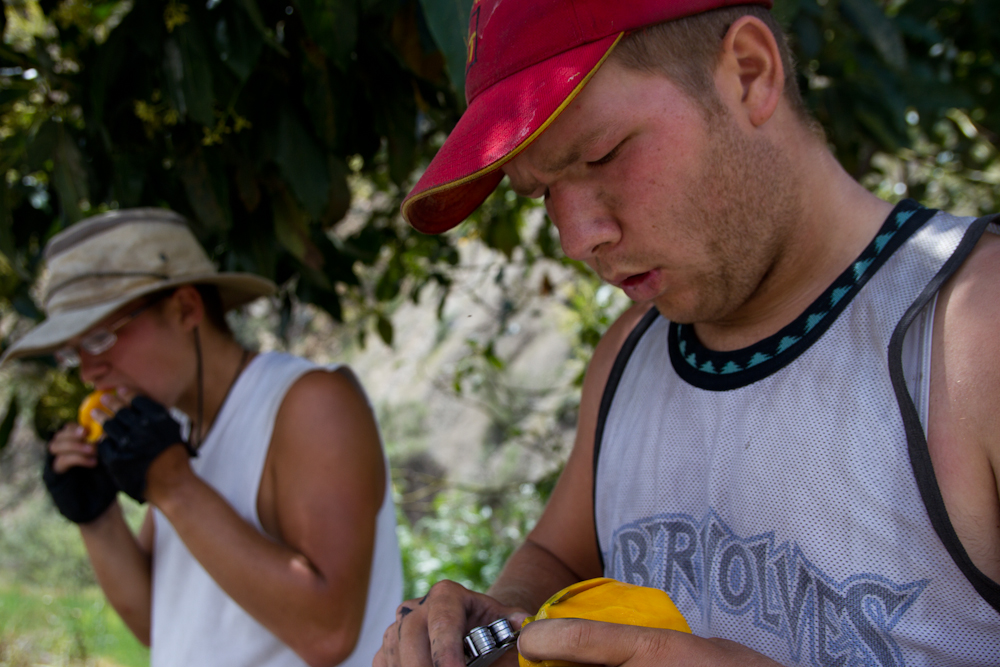 Mango celebrations were to be had after reaching pavement once again.

The snow-capped peaks of the Cordillera Blanca in sight.