Our_Surly_bicycles attract a lot of attention, which can be attributed to both their “Agent Orange” paintjobs, the brightly colored Ortlieb bags that hang from them, and the gringos riding them.  A while ago we struck up a conversation with an employee of a grocery store who was moving carts in the parking lot.  He noticed our bicycles and asked about them.  At one point I was describing how protective we were of our steeds.  “These bicycles are our lives for a year.”  And it is true. 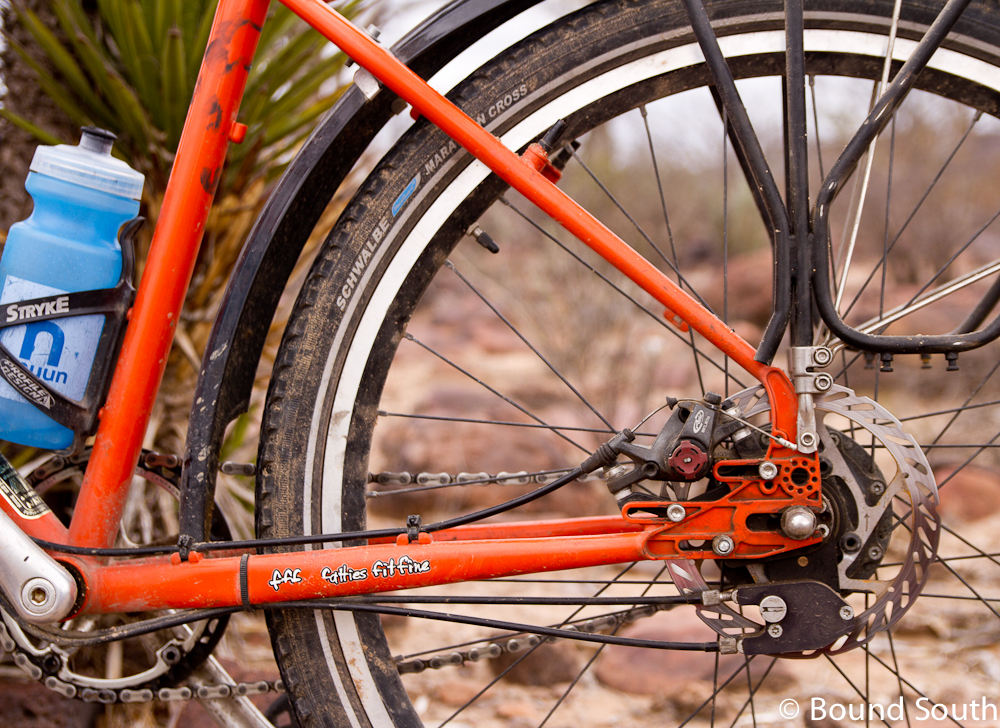 Our wheels get a lot of attention as well, mainly because at first glance they appear like single-speed bicycle wheels.  Once you look closer, however, you notice the cable housings for the shifting mechanism and the oversized rear hub.  Enter the magic of the Rohloff: 14 speeds in an internally geared hub.  These German Schätzchen of ours get the job done, transporting us and our gear reliably, smoothly, durably, and as fast as our legs can handle.  Neil at Cycle Monkey took care of our Rohloff wheel build in California, assembling purpose-built wheels for our rugged expedition touring.  The Rohloff disc-compatible rear hub was paired with a Phil Wood disc-compatible hub on the front wheel, all laced with 32 strong spokes to Velocity’s Cliffhanger rims.

German engineering at its finest.

Let me indulge my inner bicycle nerd and explain to you what I love about these wheels.

Guadalajara_and_North Dakota are worlds apart.  Today the distance shrinks.  In Mexico and at home, love abounds, family is primary, and somehow snow is nowhere to be found.  May you all find joy and love with your family this Christmas Day and reflect on that rare blessing that you possess in the company of your loved ones.  Merry Christmas!

Angus dressed for work in his festive Mexican Christmas attire.

A Guadalajara Christmas with the Salazar Family.

Surly_is_a_pretty cool company.  They make bikes, really good bikes, bikes built out of chromoly with strong welds and good character.  Just ask a guy named Troll.   We all chose the bike named Troll for Bound South and have built three of them nearly identically to one another.  Yet we have all developed individual relationships with our bicycles and our gear since leaving Alaska.  Bicycle touring is certainly not all about this equipment; there are many tourists who could probably get by on used hybrid bikes and backpacks.  One has to keep everything in perspective and take nothing for granted.  We are thankful everyday for what we have: a superb bicycle and three bags of stuff each.  This post marks the first step in a series chronicling all the stuff of Bound South that you usually just glimpse in pictures; the Trolls, the trinkets, the tools, the tent, the luxuries and the immense satisfaction that comes when the little things don’t let you down.

David's Troll, named Goliath, all dressed up for work.

The bikes are a natural place to begin.  If our Trolls could be personified, they would be much like Surly’s officially unofficial spokesman: they are honest, unusual, they ride lots, and they do great with laughter.   Within a few days of leaving Alaska, I had christened my Troll Angus.  There was no real reason, except that I was raised on a farm-and-ranch, love a good steak, and thought that the name suited my bicycle.  My day begins with  “Good morning, Angus, today seems like a good day to kick butt, don’t you think so?”   This bicycle is a tractor with panache.  It can do just about anything.  I do have another bicycle at home, though.   To be completely honest I have three but I don’t like to dig too deeply into the ugly details of my addiction.  Don’t tell Angus.  We’ll focus for now on my Lieutenant, my go-fast bike, my pretty little thing that weighs 17 lbs and speaks Campagnolo.  It’s my Giant TCR Advanced road racing bike that I picked up after my Bianchi cracked. 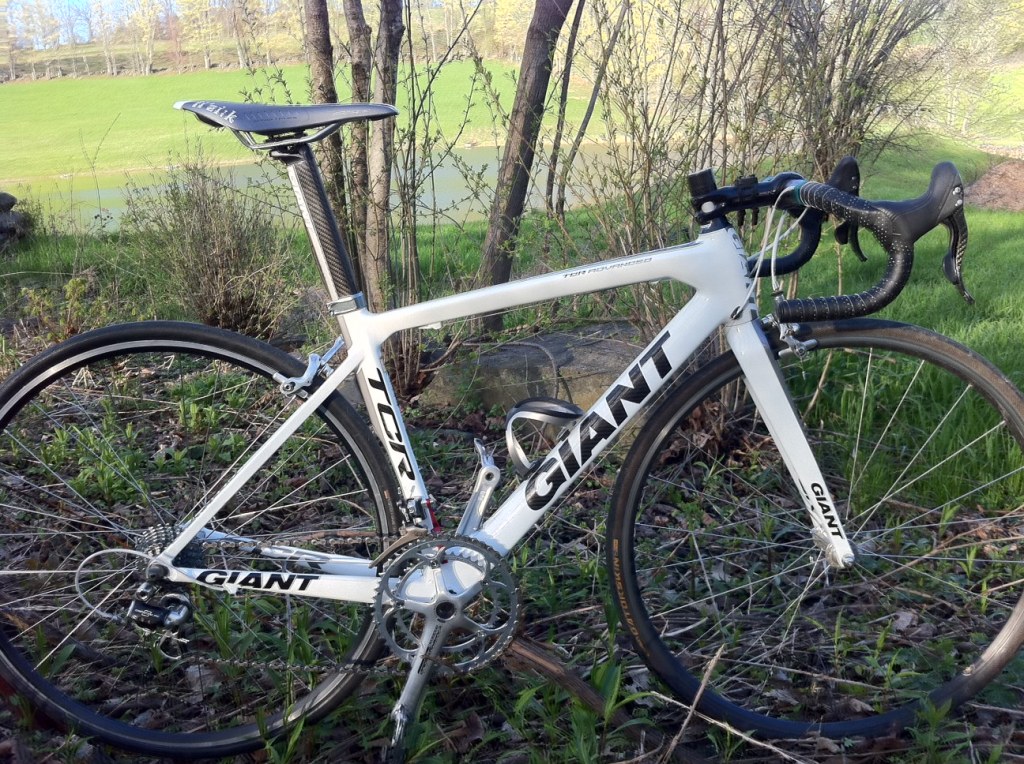 A bicycle for a different kind of riding.

If I want to race or to fly around the roads on a training ride, my Giant is my dream bicycle.  If I want to get groceries, it’s like a Ferrari with no trunk.  Before Bound South, I had never seriously ridden anything other than a road racing bicycle.  The zen of skinny tires and humming pacelines was all I knew.  When I first took a ride with Angus that fateful day in Fargo, ND, I was admittedly a little bit hesitant.  Angus is heavy.  Angus rolls a little slower with big, heavy, fat, bulletproof Schwalbe Marathon tires.  Angus is designed to be flicked around dirt singletrack like its brother the Surly’s 1×1.  Unloaded, Angus can be twitchy on the road due to its dirt-optimized geometry.  He behaves very nicely on pavement and dirt while loaded.  What can I say?  Angus possessed everything we needed to ride from Alaska to Argentina and he could carry it with class.  Angus was a new friend yet somehow also the bicycle I’ve known my entire life.  Angus represents a beautiful marriage of theory and practice; he is a chromoly touring bike that can run sturdy Surly racks, bombproof disc brakes, broad fenders, fat tires, and God’s uber-German-bicycle-gift to man: the Rohloff.  Angus forced me to reconsider what I could expect of a bicycle.

Angus and other bicycles like him represent an idea that I find intoxicating.  That idea is that bicycles shouldn’t be limited.  If your bicycle is only a weekend exercise machine that has your back screaming in an uncomfortable position, chances are that it will hang dusty and unused.  If your bicycle is only a rusted commuter with no brakes that risks your life with every cross-campus trek, it probably won’t last long before it hits the trash heap.  Angus would have me believe in the celebration of form and function; that a bicycle can be your beautiful commuter, your grocery store getaway, and your trail explorer or bicycle camper on the weekends.  Or maybe it can take you all the way to Argentina, if you’ve got the legs and the will and the time to let it take you there.

Climbing in Alaska, a world away it seems.

A few people really get this, and with any luck they’ll shake up the world and get more of it back onto a bicycle.  It seems a world away, but I think of our past photography presentations at Bend Velo in Bend, Oregon and Velocult in San Diego, CA.  These were highlights of our journey through the United States where we stopped at a bicycle shop, put our photography on a screen, and met the local cycling community.  We shared our story and learned more about the places we were traveling through.  These were shops where the owners really got it.   Too many people have forgotten what makes bicycles so powerful and so functional and so beautiful: they become intertwined with our everyday lives.  Here’s to hoping that shops like this can thrive and make a difference. 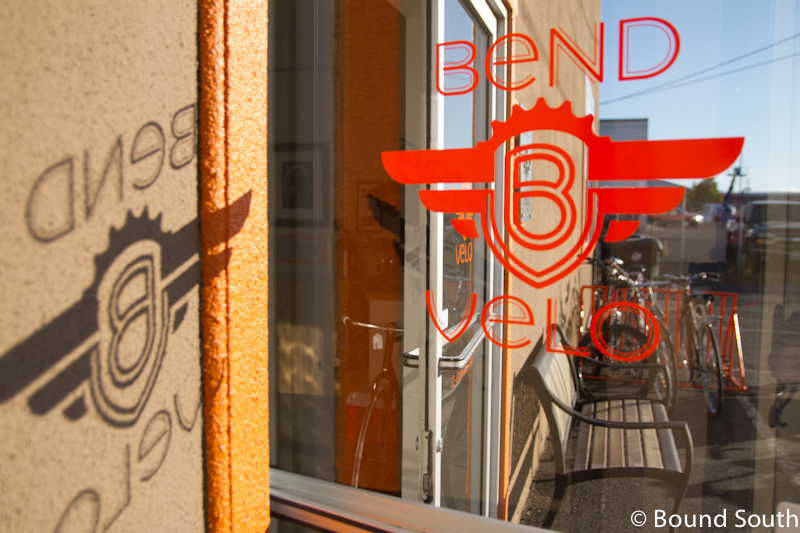 Bend Velo, one of the shops we presented at in Bend, OR.

As for Angus, we’ll be hopelessly intertwined for a very long time.  Assuming Angus doesn’t die or run away, he’ll be around for the rest of my life, serving as my faithful companion through hardship and illuminating new horizons with every turn of his wheels.

Brooks: Do your butt a favor, please, and get a leather saddle.

Climbing the cobblestones up to our home in La Paz.

Birth Pangs for our Trolls

If you ever get the chance, I highly recommend preparing for a nine month bike expedition.  Actually going on that nine month bike expedition?  No comment, yet.  The preparation is a journey all by itself!  It often seems like bracing for death.  We evaluate the truly important things in life with more perspicacity, spend more time with the people you love, and our material possessions seem increasingly trivial as we prepare to sell them or leave them behind.

While we appear to brace for death, we fully intend on surviving all 20,000 miles between Anchorage and Argentina.  Our Surly Trolls will carry us there.  Today, they arrived!  Well, two of them at least.  UPS appears to have misplaced the third Troll somewhere in Minneapolis, MN and there is no telling when it might arrive.  But no fear!  Craig at Paramount Sports in Fargo is saving the day.  He’ll have a Troll substitute ready for us by tomorrow afternoon.

This bicycle build has me smiling.  Our wheels came in today and let me tell you: there is something positively beautiful about a well-built wheelset.  We are running Phil Wood front disc hubs, Rohloff Speedhub rear hubs, all laced strongly to Velocity Cliffhanger rims.  Yum.  I can’t wait to see them fully built!  You can see the full bicycle build spec on our gear page.

Normally I am a “big ideas” kind of guy.  I don’t get caught up in the minutiae of most things.  I embody the Type B personality.  Preparing for this expedition runs against the fiber of my being.  Questions such as, “How will we carry all of our gear?” and “What if we get caught in a snowstorm in Alberta?” and “How will we purify water?” cannot be met with calm ambivalence and an attitude that things will “just kind of work out.”  Every individual bike part needs to replaceable, durable, and cross-compatible.  The little things need to be worked out to exhaustive completion.  Luckily, preparing for the unknown is thrilling and we are all motivated and excited about what lies ahead.  Choosing saddles and tents may seem mundane, but for us it is another opportunity to determine how we will live, ride, sleep, and eat for the next ten months!

Tomorrow, Friday, we will have our send-off party at Oak Grove Lutheran High School in Fargo, ND.  Come to the Eid Center at Oak Grove between 7PM and 9PM to say good-bye to Nathan, David, and I before we leave for Alaska.