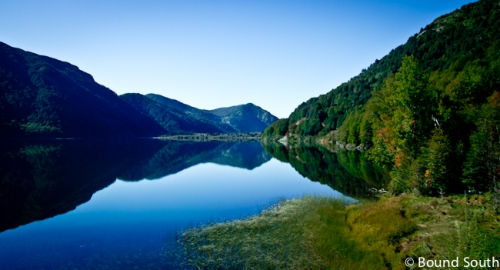 Patagonia._This is the place that has occupied our imaginations since leaving Alaska; not only for what it is, being one of the last wild places left in the world; but also what we would be on arrival.  Sometimes we think about what it would have been like to meet a parallel universe’s version of us, traveling from south to north, from Ushuaia to Alaska.  Had we met our counterparts as they entered Whitehorse in the Yukon Territory, many months since they had left Ushuaia, and so close to their destination…I reckon we might have regarded them as some kind of otherworldly being, almost as if the Fellowship of the Ring had met Tom Bombadil while he was casually riding his bicycle through Mordor to Mount Doom.

A day’s ride through this country can bring you through the diversity of an entire continent’s ecology.  Just the other morning we passed by Chilean mountain lakes and snow-capped volcanoes, in the afternoon we battled the unrelenting winds of the arid Argentine Pampas, and by evening we were surrounded by lush, autumnal timber forests that echoed Canada and Alaska in September.  For the rest of our lives, the memories of riding through so many diverse landscapes in a single day will never fade.

Patagonia evokes other memories as well.  Freezing in our tent at night, we are reminded of the bright, warm days and cold nights in Oregon and Alberta.  The long, empty, and windy stretches between places equate to those many kilometers we rode the Cassiar without grocery stores and gas stations to refuel.  It’s funny, but we miss Mexico with its air-conditioned Oxxo convenience stores on every corner, and Peru’s impossibly delicious, simple, and dirt-cheap restaurant meals.  We got two-course feasts in Peruvian cocinas for as little as $2.  Here in the beautiful, sylvan mountains and windswept valleys of Patagonia, you can’t get a restaurant meal for less than $8.  On $10 a day, our options are somewhat more restricted; and so our MSR stove has returned to its prominence in our lives in a manner unseen since North America.    The echoes of those first hilarious days of novice bicycle touring in Alaska will prove to be perfect closure for this last chapter of Bound South. 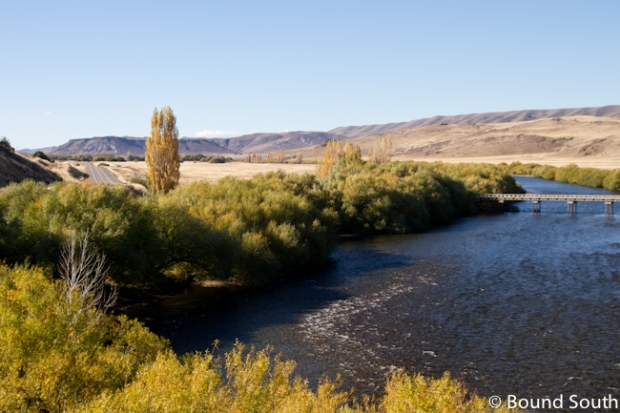 Echoes of western North Dakota in the Pampas.

Cooking before the cold

Apples and berries have returned; Isaiah climbed 20 feet up for the upper branches. 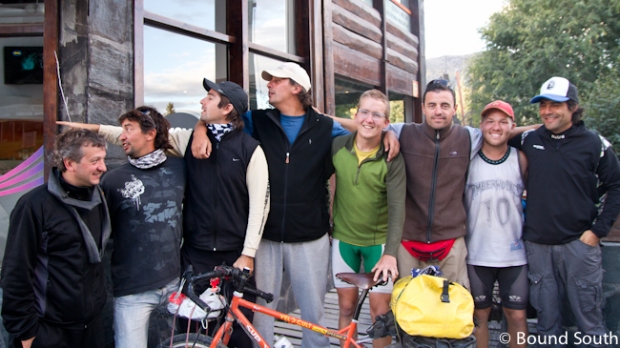 The Gang - These gregarious Argentinians stopped to chat with us multiple times.

A cold and wet morning after a rainy night - We cooked dinner in the bed of this old Ford the night before.