The_beauty_of this bicycle journey is the way in which landscapes get burned into your legs.  The Americas and the Andes are no longer an abstraction.  Distance can be reformulated in terms of effort.  All of the faint guesses at the road ahead are replaced by the tactile grip of hands upon handlebars, tires upon stone and dirt, and landscapes burned into your memory.  In the remote mountains of the Colombian Cordillera Central the mountains shoot up, their lush vegetation contrasted with the jigsaw puzzles of farm fields, cliffs, waterfalls, and lakes.

Hard stones and a dirt road climb for 30 kilometers.

Riding up to where the clouds rest

There is one lonely road crossing these mountains from Mocoa to Pasto, a rugged road with few peers the world over.  Our ride into a new world began at 2,000 feet outside of Mocoa, taking shelter from tropical rains and preparing our South American Trolls for their ride on the wild side.  Since leaving Central America, we acquired some knobby Kenda tires and ditched our fenders other non-essentials to prepare for off-road adventures.  Well-prepared, and somewhat well-rested, we pushed our bicycles out into the rain and began to ride uphill with fat, knobby tires and high hopes.

Descending through the clouds

We weren’t prepared for what we would encounter.  We climbed out of the mixed sunshine and clouds of Mocoa into the mist-covered mountains of the Cordillera Central.  Within a few kilometers, our strangely empty paved road became a narrow, single lane of winding dirt and stone.  Imagine if someone laid down a ribbon of mud, sprinkled sharp paving stones on top, and let it all dry to satisfaction.  This was our road, the lone highway across the mountains between Nariño and Putamayo of Colombia?  Absurd.  Imagine if the one bridge from Fargo to Moorhead was a narrow pedestrian rope-bridge, or if the only crossing between California and Oregon was a dirt road somewhere below Crater Lake.  As we were passed by countless death-defying trucks and combis on their five-hour, 130 kilometer sojourn through the mountains, I could hardly believe where we were.  One moment we were climbing underneath overhanging cliffs, another disappearing into the mist, and soon reappearing in time to cross a stream that became a waterfall beneath our tires. 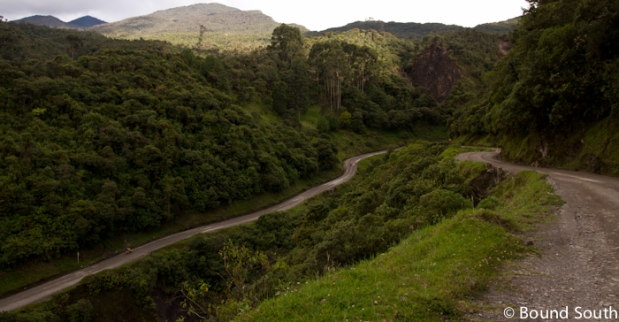 A sweeping descent to the valley below 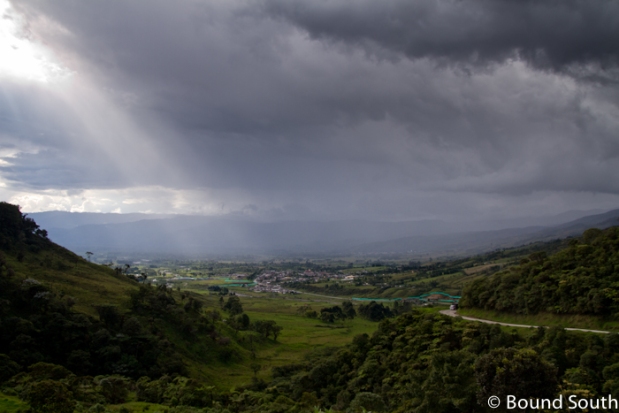 Storms flew across this mountain valley

We climbed up and down to 10,000 feet on far too many cold mountain passes, each a victory with little fanfare as the stones would only punish us more as our speed increased on the downhills.  Disheartened and hungry, we frequented many small roadside restaurants where a heaping plate of chicken and rice and potatoes would set us back a princely $2.  We had surmised that a very early start would get us to Pasto in a little over a day.  Three major mountain climbs and impossibly rough roads meant that we took a full two and a half days to complete the journey.  The last forty kilometers to Pasto brought us smoother dirt and even some long lost pavement, which made up slightly for how worn out our bodies were from bouncing across the stones for two days.

A restaurant and campsite for the night had no electricity but much character. 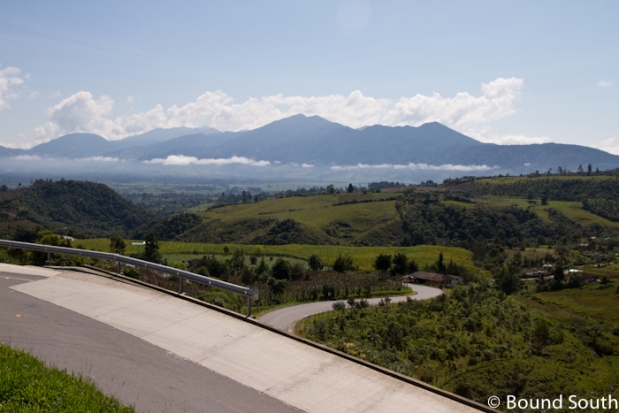 Climbing out of the valley, on pavement this time 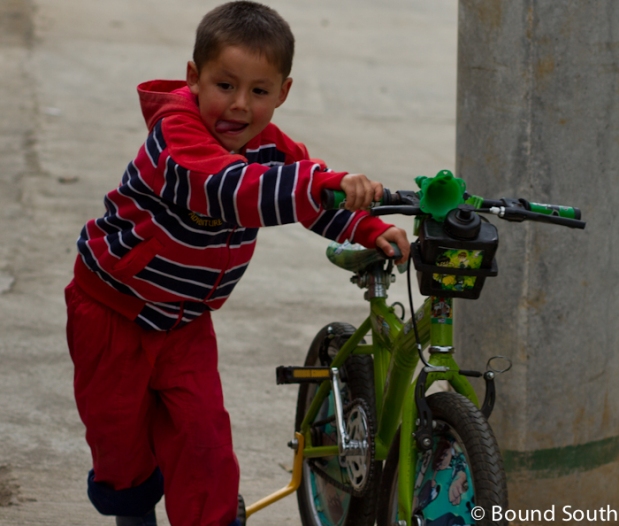 We met this avid cyclist at a lunch stop

Reaching Pasto, finally, we struck up a conversation with some firefighters outside of the city center.  Soon we were talking to the chief of the bomberos and we had a place to camp for the night.  Camping and asking questions can take you a long ways in this world.  And now as we are days from Ecuador, already the pain in the legs is fading and the memories call us back.  This was easily the hardest ride we’ve faced since leaving Alaska.  Roads like this call us to continue and maybe, if we’re lucky, to one day return. 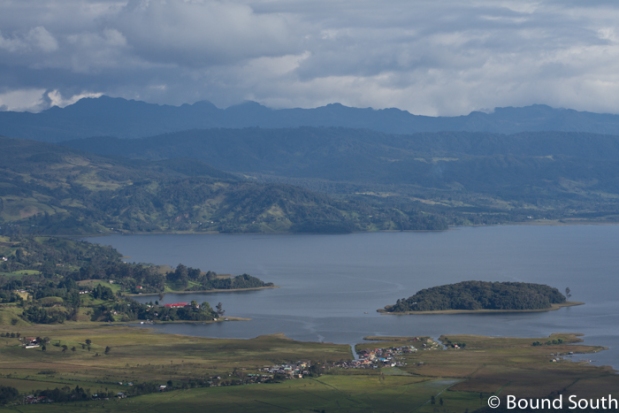 It was hard, but resting with the bomberos allowed us to recover nicely.