A_surly,_hard-as-nails German professional cyclist named Jens Voight was once asked what he tells his legs to do when he’s hurting in a race.  His response?  “Shut up legs.”  One might think that after many thousands of miles our legs would be silent killers, mashing fat-kid watts and dancing on the pedals to soar over the Andes.  Yet another cycling maxim comes to mind, Lemond’s famous quotation: “It doesn’t get easier, you just get faster.”  And so it goes for us, except the “faster” part might be a little dubious.

Flying down rough mountain descents; bad pavement can be dangerous.

Most people have no idea what it is like to pedal a bicycle all day, day after day.  We certainly didn’t before August.  We had no collective touring experience before we drove up to Anchorage to begin this project.  Our early days of bicycle touring in Alaska provide constant memories and comic relief to this day.  I was a competitive cyclist before Bound South but that doesn’t make Angus any less of a big, fat, heavy monstrosity to pedal uphill.  We aren’t looking for pity, just understanding.  Every day is a pretty hard day at Bound South; not so hard that we doubt ourselves, never so easy that we take anything for granted.  Cycling is 99% physical; what you can do is what you can do.  The mental 1% is small but pivotal; if Bound South were the Death Star, it would be the uncovered thermal exhaust port.  If your head is in the right place the human body is capable of some miraculous things.  If not, you might have a date with a proton torpedo.  A good mind alone can’t get you to Argentina; that’s why “dreamt” isn’t the same as “done”.  But bad mental states can certainly keep you from it.  A good mind is necessary but insufficient. 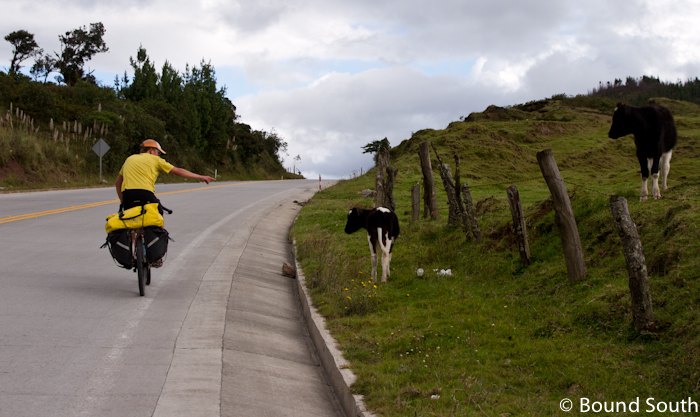 There's a cow out at the pasture! Time to go fencing, right Dad?

The number one challenge I have encountered in protecting my “mental game” is compartmentalization.  With cycling in general, and a bicycle expedition in particular, it is almost impossible to separate your mental outlook from the environment being pedaled through.  It’s hard enough to wake up at some ungodly hour to pedal through cold rain for a few hours for training or, heaven forbid, for fun.  It’s even harder when you don’t have a choice, when “home” is an MSR tent, and when the end of your ride will guarantee no more comforts than the beginning.  A common thread in all athletics is a powerful and intoxicating self-awareness of the body; it’s strength, coordination, exhaustion, performance, and recovery.  The experience of disciplined athletic training for the first time is akin to pulling aside a dashboard curtain and seeing the gauges of your car for the first time.  Once you’ve seen it once, you’re forever aware and would never go without it again.  So it goes with us; we attend constantly to the sensations of our bodies, fueling and refueling and feeling the sensations in our legs as we move southwards.  On a bicycle expedition, however, countless other concerns compete for my mental space along with the stresses of our bodies.  Some of it is trivial, like the  countless decisions we make on the road about where we will rest, where we will eat, and where we will camp for the night.  Other things are easily taken for granted, like the water we used to get from the tap.  Acquiring 20 liters of reliable, cheap, purified water to get us through the day is just one of many small details that get lost in the noise of these concerns.  Sometimes I wish that Bound South could just be about riding our bicycles and taking pretty pictures.  That’s the fun stuff and it’s not hard to handle even on the hard days; though the stress can leave you vulnerable.  Minutiae accumulate like pebbles in a stream, and they can bring you to the brink before you recognize it.  Once you are tired, thirsty, and battling a headwind for 180 kilometers on the Peruvian cost it is more understandable when a flat tire at dusk makes you want to throw Angus into a river.

Szczerbiak has never, ever been this clean since leaving California.

These Ecuadorean climbs went on, to quote a farm kid from Eastern Washington, "basically forever."

The key is always to keep your eye on the prize.  Every kilometer done is one less between us and home.  We’re certainly not tired of this journey; it’s a privilege unlike anything I have ever experienced before.  But the end in Ushuaia is what makes every day so significant and what pushes us to ride southwards with a lot of heart.  Live like you’re dying, ride like you’re flying back from Argentina in May.  In the meantime, we’ll just tell the legs to shut up and enjoy the ride until the wheels fall off.